After one-two fascinating decades of the HEMA recent march - which has produced a remarkable stream of the valuable historical sources - it is still uplifting to find a relatively unknown sabre fencing source. [1]

The whole story began as a routine fact-checking search. I read a passage from László Gerentsér's book [2], published in 1944, that the famous Vigeant fencing bibliography did not mention any 19th century Hungarian treatises, so I have decided to check another important reference work: Carl Thimm's  bibliography [3], where I have found - as expected - some Hungarian authors: Balassa, Chappon etc. With a sudden inspiration I have decided to search: how many fencing books were printed Buda (0 book), then in Pest [4].

And bingo! Several search results have been found, among them two books of August Hermann. Later it would become evident that the SAGA's database already recorded this author, even included a link to the online version of 1861's book.

Let's see what books are mentioned in the Thimm's bibliography:


Säbelfechten - German for sabre fencing - is a very exciting keyword for me. The first book, entitled (roughly): Basic features of a manual for sabre fencing: in addition to fencing tasks and their solution does not yielded any interesting pictures, only this one. 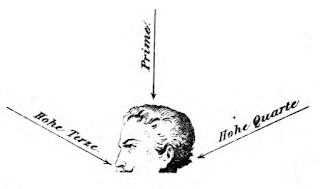 Also it has become painfully obvious that this book was printed in Fraktur typeface, which is really-really uncomfortable to read. But the second book, also in Fraktur, entitled approximately: Key to the art of rapier and Sabre fencing a la Contrepointe, published in 1861 [6]: 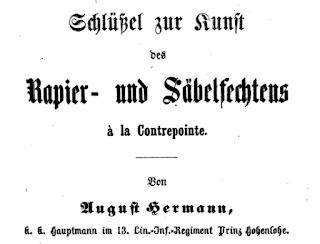 has been full of interesting visual stuff:

This is only preliminary information about these two interesting sabre fencing manuals. At some stage it will be necessary to transcript Fraktura text into modern German, and then the proper translation and interpretation could start.
____________________________________
Posted by (B) at 15:43