The whole thing is only tangentially connected to the main topic of this blog, but it is nevertheless great fun to watch. There is a group who has been creating several realistic „lightsaber” models based on the currently available technologies. Their latest achievement is the 2000°C plasma „saber” with a retractable (!) blade.
And naturally they have tested it in every imaginable way, even against... a commercially available „lightsaber”. 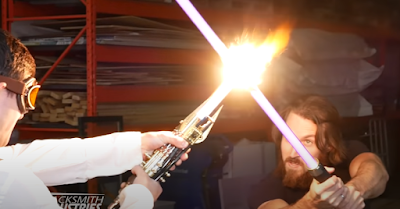 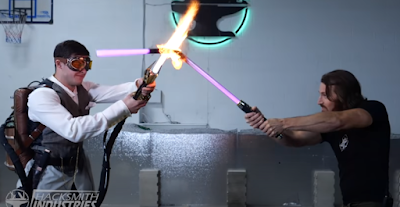 Today I have learned that an old-old online opponent, Wazull passed away in May. He was just 52 years old... How sad... 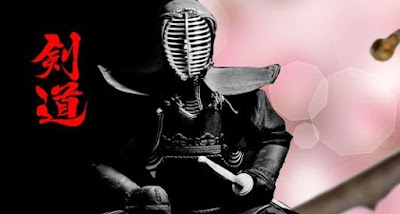 Wazull had been practicing kendo since around the early 90s and for many years was the very active member of Hungarian online community, especially on the biggest local forum called Harcművészetek (Martial Arts). He wrote at least 7588 posts in total, including 5805 posts dedicated to the different aspects of martial arts, especially Japanese swordsmanship, including kendo.
Back in 2008-2009 we had rather heated discussions about fencing, about HEMA (Historical European Martial Arts), about the possibility to reconstruct these lost arts based on available medieval books, on the quality of fencing displayed by European HEMA-enthusiasts around that time. He was a relentless, learned, highly intelligent and skilled debater, who -- occasionally -- came across as rather sarcastic or even arrogant. Despite of this he left behind a huge amount of interesting and valuable posts! 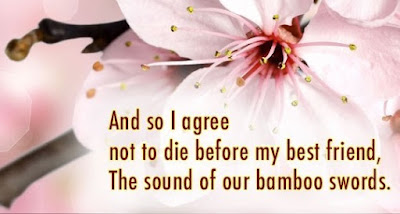 Email ThisBlogThis!Share to TwitterShare to FacebookShare to Pinterest
Labels: Hosszúkard

...modify the tip of a plastic longsword (Red Dragon, RD) in order to make it more or less compatible with kendo headgear. We have been using a pair of synthetic longswords since May. They are absolutely great for beginners to learn the basics of the German longsword tradition (KDF), and also for light sparring (basically with nothing more than leather gloves and standard 350N masks).

After a while, together with my fencing partner we have decided that it would be a good fun to fence with local kendo guys. More than 10 years ago -- as a complete beginner -- I fenced with them: shinai vs Olympic sabre. [1] But there is one big problem: shinai -- Japanese bamboo sword -- is really stiff (static flexibility somewhere between 17 and 22 kg), compared to Red Dragon's flexibilty (3.2-3.5 kg). So substituting shinais with plastic longswords while fencing with kendo guys is basically rather straightforward idea, but you have to overcome the next obstacle: the plastic blade could easily slide between horizontal steel bars of the kendo headgear (men), with obvious serious consequences (eye damage via blunt trauma).

The biggest distances between adjacent bars is 11-13 mm. [2] 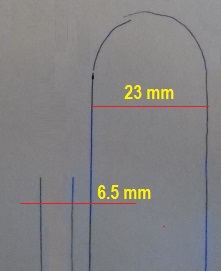 After taking into account all these details we thought the following modification would be sufficient to ensure relatively safe sparring with plastic longswords between a kendoka and a fencer. What we need for this? Only very basic stuff: a plastic cork [3], a piece of leather (approx. dimensions: length - 230 mm, width - 20-21 mm) and some insulation tape for securing the cork to the RD's tip. 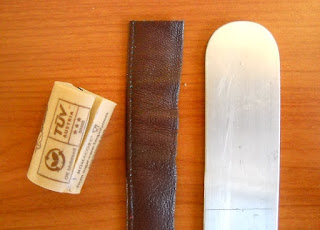 In this post I am using an aluminum blade (width: 30 mm) to show the process of the modification. I think that the pictures are definitely self-explanatory. 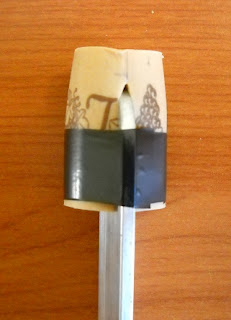 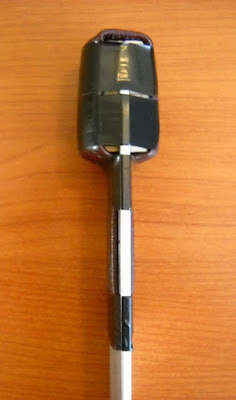 After this modification we have a rather solid addition to RD's tip, whose dimensions -- thickness in one direction: 23 mm, in another: 31-32 mm -- might prevent the tip to enter any gap between mengane's horizontal bars. We have already tested one longsword with the modified tip against standard 350N fencing masks. It has survived two training sessions with any damage, also made thrusts with such a longsword less painful, because the modified tip is at least 3.7 times bigger than the original one. Naturally the final test will be the encounter between an empty kendo headgear and the modified longsword.

Disclaimer:
Everybody should be extremely cautious while fencing, especially during free sparring sessions between the representatives of different fencing schools. We are not advocating the usage of modified fencing equipment. Everybody performs such a modification, and uses the modified equipment at his / her own risks. The safest way to fence with plastic longswords is to use standard Olympic headgear for both the kendoka and the fencer.
_____________________________________
Posted by (B) at 17:41 No comments:

It is really exciting to find a catalogue picture which shows such a rich assortment of fencing sabres. (A better picture.) 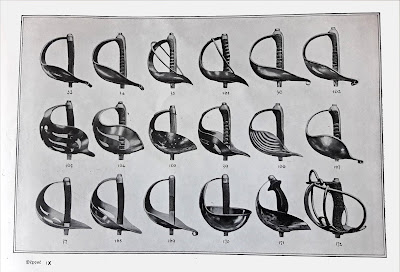 From Gerard Six FB-page [1] [2]
I planned to use the previous blog entries in order to be able to identify as many sabre hilts as possible. But with some luck I have found that Chris Holzman made my life much easier by posting a pdf of Filiberto Sauro's printed catalogue (1932). Thus we can identify all sabres with absolute certainty. (Page 5 & 6 of the Italian catalogue.) 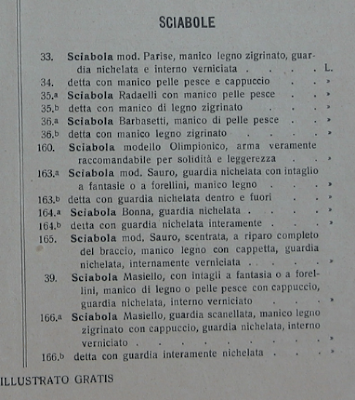 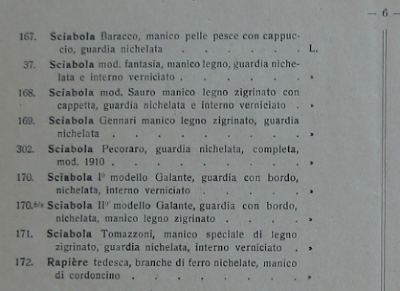 Page 6
The whole story just underlines the importance of mutually beneficial cooperation between HEMA-enthusiasts: Gerard Six had some good photos, but no text, and Chris Holzman had only text, without pictures. So by combining their goodies, now they -- and also the whole community -- have much better understanding which fencing swords were manufactured in Italy in the 30s. 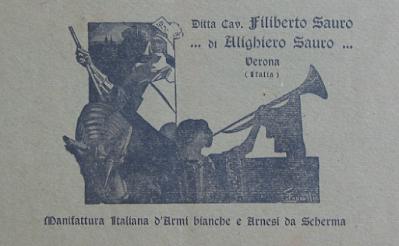 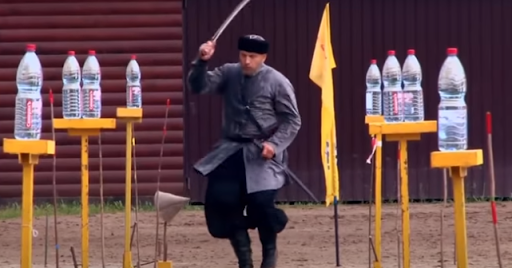 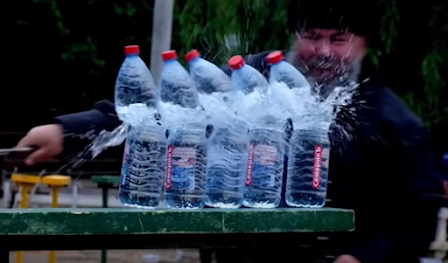 This might be the strangest sword I have ever seen so far... OK, to say ever can be a bit of exaggeration, but it is definitely true for this year. It could be the top nominee for the Strangest Sword of the Year award. 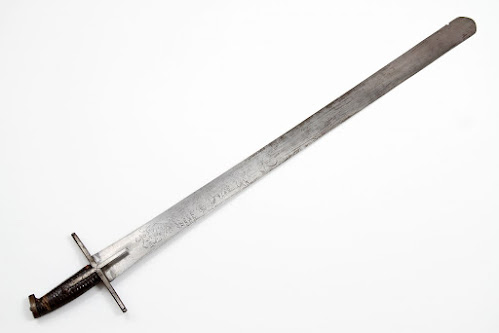 I have found a short description of this item, and fours photos at an auction site [1] while searching for Chinese jians sword of Qin dynasty. So it is fair to classify it as a completely random find! 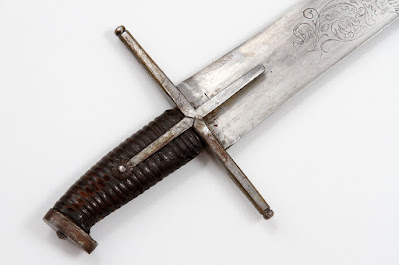 The description from the auction site provides us with the following: „Lot 34 A RARE EAST EUROPEAN SWORD HUNGARIAN OR POLISH SECOND HALF OF THE 17TH CENTURY Broad flat double-edged blade with rebated tip the lower half etched on both sides with an heraldic crest surmounting a classical portrait bust and a Latin inscription differing over the respective sides with iron crosspiece formed with button tips and upper and lower langets flat beak-shaped cap-pommel canted downwards at its front original grip bound with leather over cords and the blade tang secured by a lateral rivet on iron rosette washers.
Overall length is 37.5 inches, 95 cm, blade: 32 ? inches (83 cm).
Very good condition. Blade has a chip towards the tip and minors scratches” 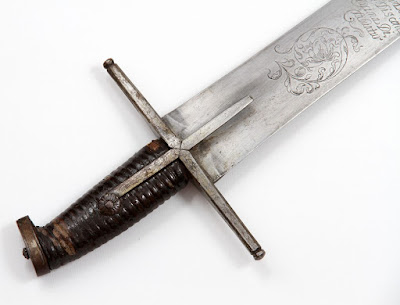 So what we have here? Basically a strange mixture of features:
Also there is a well visible dent on the working edge of the sword, near its tip. The most intriguing question: Who might have used this sword? The blade itself has all characteristics of an executioner's sword: a) straight; b) double edged; c) with a round tip. So this is one real possibility. Another -- a less probable -- option, that its owner was a Hussar who wanted an Turkish straight sword, but in this case it is rather difficult to explain the round tip of the blade.
__________________________________
Posted by (B) at 16:38 No comments:

„Original poster maquette for the 1959 World Fencing Championship. Lajos Vajda made two different designs for the same occasion. The artist used elements of both designs for the final design, which became the printed poster. The design shows a Hungarian hussar with his sword, which refers to the Hungarian traditions in fencing. The typography of the title is very elegant and decorative. Size: 18,5x26 cm” [1] 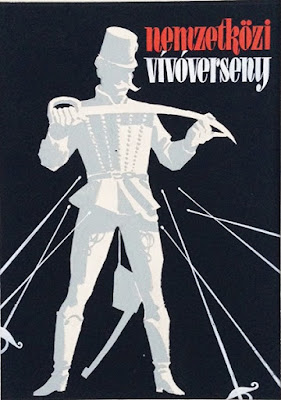 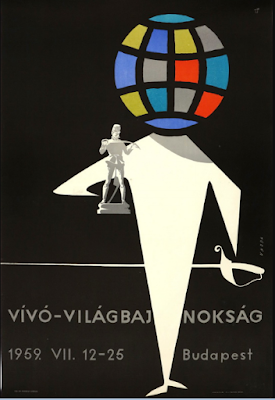 Final design
„World Fencing Championships 1959 in Budapest is a vintage Hungarian sport event advertising poster designed by Lajos Vajda.” [2] The Hussar silhouette was inspired by a statue in the Buda Castle (Budapest) called The Old Hussar created by Kisfaludi Strobl Zsigmond in 1932. 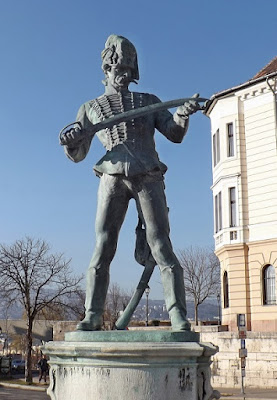 Russian re-enactors created an entertaining and historically accurate video (2017) about the protective features of riveted chain mail (the 4-to-1 pattern) against different medieval weapons. 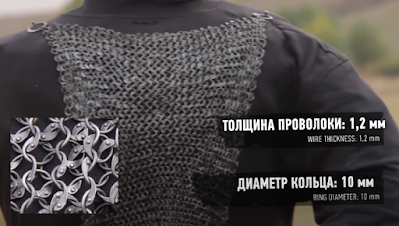 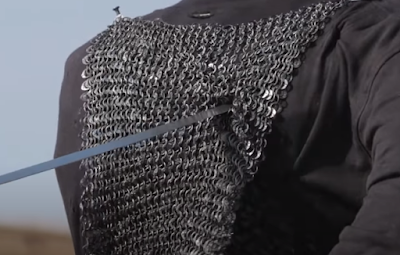 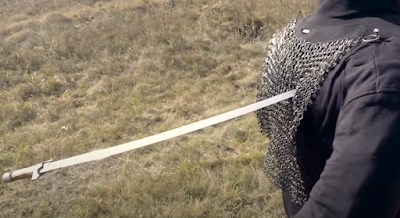 Chain mail (A) against a sabre [2]
In this particular case we can see a really deep penetration, somewhere around 20-25 cm, which could have caused a mortal wound. 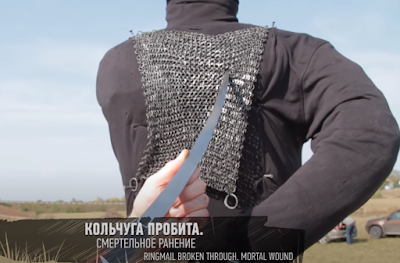 An approximate length of the blade
which penetrated the chain mail sample (A)
The thickest chain mail (D) against the pointy straight sword (1.5 kg). 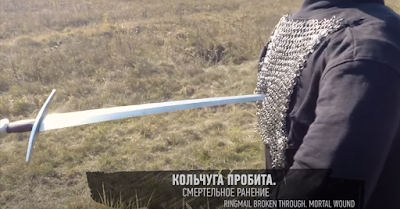 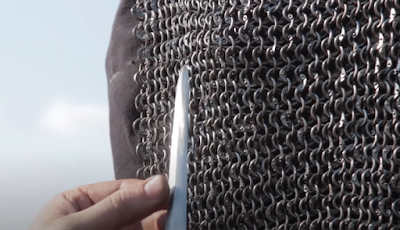