By pure chance I came across a couple of photos of Arnold being trained by Kiyoshi Yamazaki [1]. The most interesting image is this one: 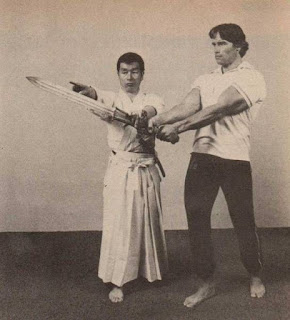 I'm not a big fan of Conan the Barbarian (1982) film, but nevertheless it is interesting to know that in the 80s a Japanese instructor was employed to improve the fencing skills of the actors. Even more rewarding is to find out the specification of the Atlantean sword, which - according to the script - Conan found in a hidden cave, next to a skeleton.

We are lucky that there are several manufacturers who produce this sword, and also many reviews are available on the net. So let's see the specification (Conan the Barbarian Atlantean Sword):
A short extract from the review at MyArmoury:

Handling Characteristics Well, what can I say about the Atlantean's handling qualities? At a weight of nearly eight pounds the sword is certainly no lightweight. In fact, the Atlantean's weight puts it far outside the parameters for a functional sword of this size. The sword does have a rather nice static balance, but once it is set into motion its weight becomes a hindrance. I was able to grasp the sword in a reverse grip and twirl it around in best Arnold fashion. I was able to maintain this for a few seconds before my shoulders began to feel the strain. In short, you'll need to have bigger guns than mine if you want to act like Big Arnold. I have no doubt that the Atlantean would be able to cut through any test medium of choice if it was sharpened. It just can't be done quickly or repeatedly. (Full review)

Additional infos can be found on Wiki: „Samson and Huchthausen agreed the weapons were heavy and unbalanced, thus unsuitable for actual combat;[120][117] Lighter versions made of aluminum, fiberglass, and steel were struck in Madrid; these 3 lb (1.4 kg) copies were used in the fight scenes.[121][117] According to Schwarzenegger, the heavy swords were used in close-up shots.[122]”

From the above it is rather easy to conclude that a 3.5 kg two-handed sword is not particularly well suited for actual combat. The average weight for a historical longsword was between 1.1 and 1.8 kg (the average weight of 23 longswords in the Wallace Collection is 1.74 kg).

So enjoy the film, if you like the whole story etc, but aware that the actual „Atlantean” sword is way too heavy and badly balanced when compared with historical European longswords.

It is also fun to watch Skallagrim's video (How to Make Conan's Atlantean Sword Better?) A really good point from it: why is the Atlantean sword so (comparatively) short? 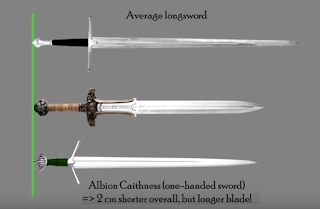