Originally I thought that I will name this post something like West vs East, or Versus II, or HEMA vs kendo, but those names were so obvious that I have rejected them almost immediately.

A bamboo shinai of the kendoka (Marcello) crossed a plastic sword of the practitioner of the Bolognese swordsmanship (HEMA instructor Fabio Serraglio). The fencing match was hosted by Enrico Campobello in his Sala d’arme Il Carmagnola. You can watch the video of this bout at YT, narrated by Federico Malagutti.

I have found this video very enjoyable for several reasons. Firstly due to the quality of fencing. Some very cool actions can be seen during this bout. For example: an incredible inquartata 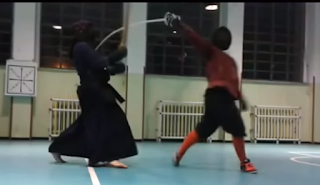 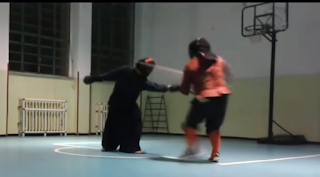 
Just to show that I could appreciate cool actions on both sides. A nice one-handed thrust by the kendoka. The tip of the shinai hits Fabio at the moment when his attack is still in progress. 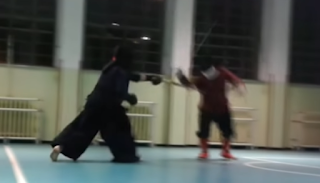 Secondly it is really good to see that a well trained HEMA swordsman could fence elegantly an equally well prepared kendoka. 10 years ago at the biggest Hungarian martial arts forum a senior kendora simply derided HEMA fencers, their equipment (weighted shinais with a crossguard), and generally their level of swordsmanship. Good to see that the situation has changed forever!