Most people assume that the content of Wikipedia articles is more or less static. That is not the case. Let's see for example Kendo article. On 26th July 2010 an editor - Kozushi - created an interesting and informative section called Comparisons with Western Fencing:

„Comparisons with Western Fencing
Kendo and fencing, the two major international sword-based sports, are similar in many respects. The major similarities and differences are outlined here:

Footwork is different as the two handed shinai demands that the body face squarely forward. Therefore, both feet point forward with the big toe of the left foot as far forward as the heel of the right and with about one foot length distance between them. In fencing the back foot angles out at 45 to 90 degrees and the forward foot is further ahead to enable balance and further reach with the lunge. The kendo footwork closely resembles that found in historical fencing manuals such as Joseph Swetnam, Giacomo di Grassi and George Silver where the body and both feet are turned squarely forward, and the heel of the right foot near the big toe of the left, as in kendo. 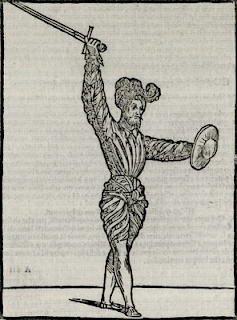 This is an illustration [3]

Footwork similarities include the use of shuffle stepping to move forwards and backwards and the lunge being the primary means of scoring a point. The kendo lunge is executed with different movement dynamics from the fencing lunge, since the power stems from the outward rotation of the hip and drive off the calf muscle instead of the extension of the leg; however, the speed and reach of the attack is comparable. Kendo requires a stomping step to score whereas fencing does not, and forward recovery is typical in kendo while the backwards recovery is typical in fencing. Body contact forbidden in fencing is allowed in kendo.

The primary guard position with the sword is very similar. The sword is held in a central position with the point extended out towards the opponent. In kendo, the tip of the sword is to the right of the opponent's tip so as to facilitate guarding against cuts to the wrist. This is called chūdan no kamae. Fencing also has the tip slightly to the right of the opponent's. In kendo, the kendoka place their hands on the shinai or bokken in the same location regardless of whether a kendoka is left-handed or right-handed. The left hand is placed at the bottom of the shinai with the right hand near the tsuba. Also, the right foot is placed ahead of the left foot.

There are alternative guard positions in kendo and Western fencing. In kendo, the two other guard positions utilized in keiko are gedan no kamae, where the tip of the shinai is pointed to the floor, and jodan no kamae, where the shinai is lifted above the head. In fencing, the tip of the blade can be pointed downward. In modern fencing with electrical scoring equipment, the fencer's en guarde position can be such that the weapon arm is drawn back such that the blade is point up in preparation to strike, an uncommon Jodan-like stance often and effectively used by eight-time US Foil champion Michael Marx.[18]

In theory kendo scoring is quite similar to épée: first one to hit the target with sufficient force wins. However, successful kendo points must pass a style template (ki-ken-tai-itchi, outlined above) while épée points do not, excluding matters such as boundaries and sportsmanship. Kendo lacks the concept of "right of way" (that executing a counterattack is de facto a fault if the original attack succeeds in hitting) as applied in foil and sabre.

There was an alternative version of the Scoring subsection:

„The major differences lie in the scoring of a point. In kendo the stroke of the shinai, the kiai and foot stomp known as fumikomi must all take place simultaneously. Following this, there are several acceptable methods to demonstrate zanshin or continuous awareness after the strike. One common method involves following the strike with three swift smaller steps past the opponent and then turning around to face him or her in a ready position. All of these must happen to score a point. In fencing only the touching of the sword to the opponent's pointable area with sufficient pressure counts for a point. No kiai, fumikomi or zanshin is needed. This makes scoring at close quarters in kendo more difficult than in fencing as the momentum necessary to create an acceptable zanshin demonstration is harder to generate then when one is further out. Therefore pushing the opponent backwards or using the opponent to push oneself backwards, or both methods, are often used to generate distance when close to one another. In fencing, physical contact, known as corps a corps is forbidden. Instead, sword strikes without major footwork movements is often used at close quarters.”

On 7th December 2010 the whole section was still in the article. On 7th April 2011 it was severely shortened, and finally the section was completely removed on 13th April 2011 by another editor - Ekwos -, claiming that it is an original research, and therefore should be deleted from WP. [2]