""The "boxing" practiced by Figg was a very different sport in the early 1700s then from what it is today.  These were no-holds-barred contests that would usually take place over 3 bouts, one of swordplay with a choice of live swords, daggers & shields, one of bare-knuckle boxing, and one of quarterstaff or cudgels. The earliest "boxers" not only had to learn various weapon skills they also trained in a fist fighting art that included eye gouging, hair pulling, spitting, head-butting, purring (shin-kicking), stomping and kicking downed opponents, or wrestling throws and grappling whilst on the ground. The men who partook in these matches were often referred to as "prizefighters" because they would fight against all comers for prizes of money, free beer, hats or cups. And the best of these "prizefighters" was James Figg."

"A third, deciding match, between the two took place on the 6th of June 1727, in front of an audience of 3,000 spectators that included the Prime Minister of England, Sir Robert Walpole. The first round was with swords and a cut to Sutton's shoulder resulted in Figg winning that round. The second round was fist-fighting which included throws and grappling, Figg won this round by submission. The third round was with cudgels during which Figg shattered Sutton's knee to win the match and reclaim the title. Now that is a mixed martial artist!"

"Figg was a big man with a shaven head and an imposingly muscular physique. Pierce Egan, one of the first historians of pugilism, described the fighter in his 1812 Boxiana as being ‘more indebted to strength and courage for his success in the battlefield than to the effects of genius’. At a time when prize fights often consisted of a round of sword fighting, a round of cudgels and a round of boxing, Figg was actually far more technically accomplished with weaponry than he was with his fists. Captain John Godfrey, who was taught to fight by Figg and was himself a talented swordsman, wrote of his mentor: ‘Figg was the Atlas of the sword, and may he remain the gladiating statue! In him, strength, resolution and unparalleled judgement conspired to form a matchless master.’ He heaped praise upon Figg’s use of ‘time and measure’ and described his way with a sword as ‘charming’.

According to Egan, Figg’s way with his fists was far less elegant: ‘If his methods of fighting were subject to the criticism of the present day, he would be denominated more of a slaughterer than a neat and finished pugilist.’ But early 18th century boxing wasn’t the subtle chess match of gloved fists and tight defences that characterise the modern sport. Instead it was a brutal bare-knuckle brawl in which fighters were expected to use their elbows and fingers, throw their opponents to the floor and land punches and kicks even after their opponents were down and out. This was a form of boxing in which blood and broken bones were accepted, even demanded. Godfrey, in his book A Treatise Upon the Useful Science of Defence, recommended that boxers aim their punches between the eyebrows as this causes the eyelids to swell, obstructing the sight. ‘The man thus indecently treated and artfully hoodwinked,’ he wrote, ‘is then beat about at his adversary’s discretion.’ He also advised that blows to the stomach ‘may be attended with a vomiting of blood’. Queensbury Rules this wasn’t.

Back-sword fighting was a brutal pursuit which made bare knuckle brawling look like a bit of a picnic. The back-sword was a small one-sided blade designed for slashing and cutting, far removed from the elegant movements associated with fencing. Fighters wore no protective clothing, with the result that Figg’s body was a web of scar tissue. Godfrey recounts a back-sword bout between William Gill – one of Figg’s pupils – and an Irishman named Butler. Gill was renowned for aiming at his opponents’ legs, and on this occasion he wounded the Irishman with a cut ‘more severe and deep’ than Godfrey had ever seen before. ‘His leg was laid quite open, his calf falling down to his ankle.’ Butler was stitched up but surgeons who operated on lowly brawlers weren’t up to much. The wound became infected and after a botched amputation the Irishman ‘soon expired’. In such circumstances, the fact that Figg retired with all his limbs in place was proof of his considerable skill." [1] 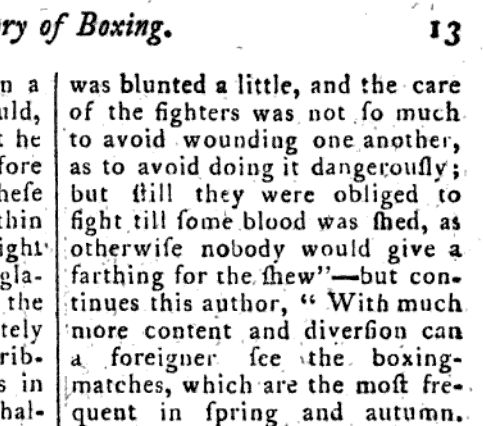 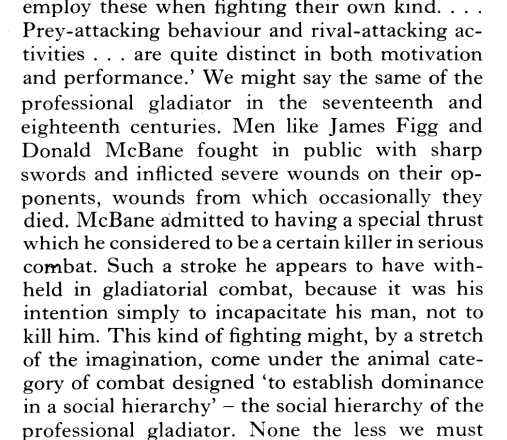