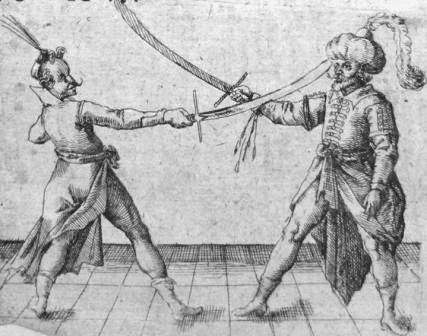 "Sebastian Heußler was a 17th century German Freifechter. A native of Nuremberg, Germany, he was the eldest son of printer Leonhard Heußler, and as a youth he was trained in his father's craft. It is unclear if he was apprenticed to Christoph Lochner, but he was working as a type-setter in Lochner's workshop by 1599. He married Sabina Prünsterer in 1601 and purchased a house in Nuremberg in 1603. Heußler probably certified as a master printer during this time, and he was listed in the records of the printing guild from 1601-04 and again in 1607.[1]

In 1608 at the age of 27, Heußler abandoned his craft and henceforth devoted himself to studying the Chivalric Art of Fencing that had captivated him since childhood (he may also have been studying fencing during his sabbatical from printing in 1505-06).[2] Heußler seems to have originally been a student of Hans Wilhelm Schöffer von Dietz, the fencing master of Marburg, which is also where his education in the style of Salvator Fabris began.[citation needed] He ultimately left his native Germany, where he said that the arts were less cherished, and traveled through Italy, France, England, and the Netherlands.[3] Heußler is described as both a Kriegsmann (man-at-arms) and monatsreiter ("month-rider"), which seems to indicate that like many fencing masters he supported himself as a mercenary.[4] He likely held the elite position of color guard in his unit,[2] as he would later author a book on the art of flag-waving. It's questionable how much time Heußler spent in Nuremberg after 1508; he moved his wife to a new home in 1615, but in 1617 when the old home was sold, his wife negotiated the deal in his absence.[4]

In 1615, Heußler authored a fencing manual entitled Neu Kunstlich Fechtbuch ("New Illustrated Fencing Manual"), illustrated by noted Nuremberg engraver Gabriel Weyer and printed by the son of his former master, Ludwig Lochner. The book treats the use of the rapier, a system described as being in the style of the famous Italian masters Ridolfo Capo Ferro da Cagli and Salvator Fabris.[3] The following year he co-authored his New Kůnstlich Fahnenbůchlein ("New Illustrated Flag-Waving Manual") with Johannes Renner. Heußler's fencing manual was apparently well-received, and was reprinted at least five times in different forms over the subsequent twenty years.

Little is known of Heußler's life after the publication of his books. Some sources assume him dead by 1630, but there is record of a General Sebastian Heußler serving the King of Denmark in 1645;[4] it cannot be determined at this time whether this is a reference to the fencing master or not."